Ages ago, we had a look at Pelltar the Sorceror, most prominent citizen of Restenford. Today we're going to ponder his many properties and the overly protective measures he has put in place to secure them.

First off we have the tower at the castle, to which he has a "deed" guaranteeing him access even in the event that the Baron should die--foreshadowing for the follow up module L2 Assassin's Knot. Because I just received my real estate license from the University of Wikipedia moments ago I profess no expertise on the matter, but I believe a deed essentially means that ownership of the tower has been conveyed to Pelltar. I've already discussed the significance of Pelltar's occupation of the phallus of Restenford, so let's get straight to the security measures:

The sorceror has secured in this building approximately 7,800 GPs worth of goods including leather upholstered furniture, tapestries, fancy clothing, cutlery, and other assorted fineries. The highlight of the collection is definitely 800 gp worth of hard whiskey (presumably it's American or Irish whiskey and not Scotch or Canadian whisky [or one of those pretentious American liquors that chooses to drop the "e"]). Less impressive: 250 gps worth of Iron Rations; that's 50 weeks at PHB prices. There are also three suits of plate mail that are valued at 300 gp. each, 25% below the going PHB rate. Presumably, unlike almost everything else in here, they are of low quality.

Posted by Timrod at 1:50 PM No comments:

Where's the ford?: Etymology of Restenford

If you're the etymologically inclined type and you see a town named Restenford, you might be tempted to assume that the "-ford" suffix denotes the presence of a ford across a river named Resten at this location; see Oxford--a town located where the river Ox could be forded. Of course, you would be horribly incorrect because the name of the river is Restin, not Resten. [Insert gut-busting laughter here]
Ok, while that statement is true, that is not the thesis of this post. No, the real issue is that there is no ford over the river Restin anywhere near Resty. Indeed, though there is no ford across the Restin, there are two bridges which might mean that Restenbridge might be a name more suited to the Barony; see Cambridge: a town with a bridge over the River Cam. One could even argue that Restinmouth would be better still.


But, at last, I've realized something that just might justify why a town with two bridges and no ford would be called Restenford instead of Restinbridge without being a Restenfraud [more gut-busting]. What if the Restin River is  one of them rivers that changes its flow with the tides--like the Hudson in our world. These rivers are called things like tidal estuaries or sunken rivers, but the word most commonly associated with them is "fjord."  So if we can agree that the Restin River is actually a fjord--at least at its lower reaches--then all we need to do is drop the "j" from fjord and you have "ford," no river crossing required.
This gains extra traction when you realize that the population of Lendore Island worships Suel deities and therefore it's not such a stretch to say that they might have a Suel linguistic heritage as well. Who else speaks Suel? Them barbarians that inhabit the fjord-ridden Thillronian Peninsula, that's who!

F Seran, artiste de Lendore, has kindly provided a link to his DeviantArt page where he goes by Fred-le-Nervien. Of particular interest to Lendophiles will be the maps of the Greater Restenford vicinity, Garrotteville, and Lac Farmin. It should be noted that the maps are annotated in the native dialect of the Lendores. These would work wonderfully as player handouts.

Not all of the art is cartographic in nature. There are some cool architectural drawings, military stuff--much of it WWI themed--and some good old fashioned fantasy art as well. Check it out already! 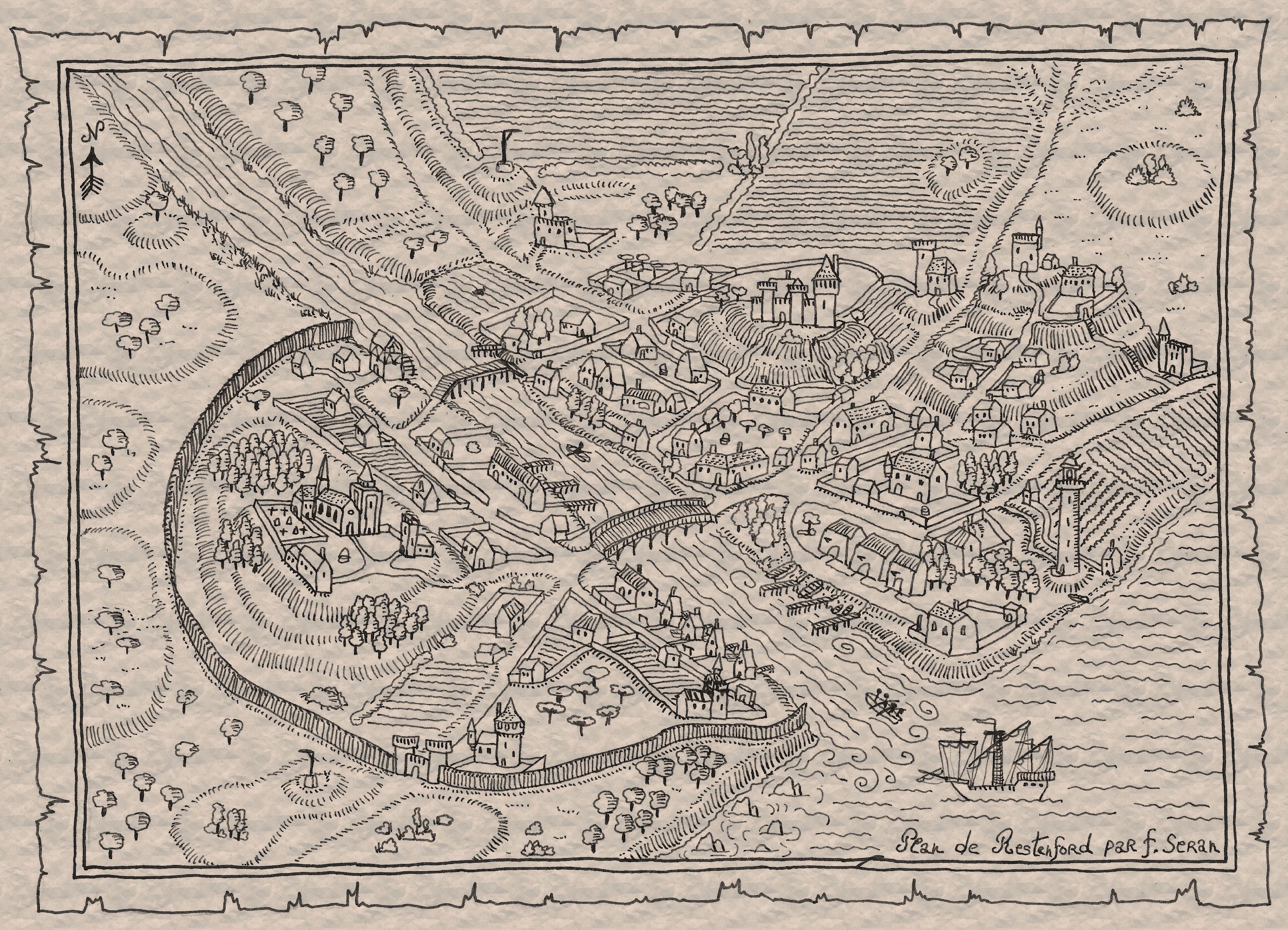 A one f. Seran has drawn up--by hand--this very nice illustrated map of Restenford. As with all the best maps, it is in French. Extra nice touches include: 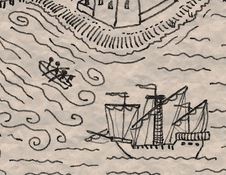 Anyway, I think this is a wonderful illustrated map and so should you. Thank you f. Seran for your contribution to the field of Lendorology.
Posted by Timrod at 11:20 AM 4 comments:

Years ago, I posted a selection of maps of Restenford that I'd
scrounged from various internet sources. Recently, a budding young cartographer named R.R. Calbick sent me a map of R'ford that he rendered up, modeled after the work of John Speed who, back in the day, made those cool old-timey maps with the buildings rendered into 'em that we all know and love. See figure 1.

Anyway, Mr. Calbick rendered up Restenford for us in a similar style over three separate maps including the original Restenford, a somewhat streamlined Restenford that has suffered the destruction of several buildings, and, in the third map, we see that someone in Restenford finally dips into the treasury to beef up security with improved guard stations, a wall surrounding the north side of the village and, finally, an adequate lighthouse so that the poor gnome can finally ply his trade with his head held high.


A point of further interest: these maps were sent to me by a one Lenard Lakofka. Yes, that's right, the inspiration for this here blog has finally tracked me down and, rather than slapping me with a cease and desist order or going full-Welcar on me and releasing the hounds, he hooked me up with Mr. Calbick and his awesome maps! Furthermore, he's also provided some other cool resources as well, which I'll get to in a later post. For now enjoy the visual treat of Restenford cartography.

Notes from the Nystul campaign

In pursuit of further knowledge of the Restenford realm, I found myself wandering around over at the Dragonsfoot Archives the other day and found this old issue of Footprints magazine from 2005 lying around in one of the stalls in the mens room. What's intriguing about this issue to you and me is that it's got an article written up by the original Lord of Lendore, Mr. Lakofka himself. The article is a description of the "Nystul Campaign," during which he took several members of the Nystul family on a guided tour of Lendore Isle back in the late 70s-mid 80s. The bulk of the text is dedicated to house rules and meta-y stuff written with that tone of braggadocio you often hear when old timers talk about how things were back in the day. But around page 16 he starts to get into some of the historical details of the campaign. Here are the highlights: 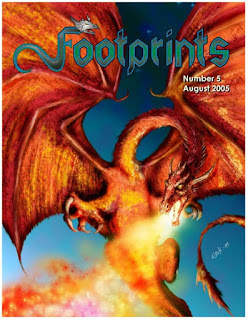 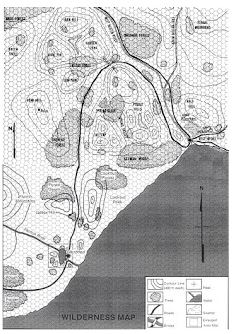 Reader Ethan has compiled the two vicinity maps from L1 and L2 into one single map; something I've wanted to do forever but, thankfully, now I don't have to. Go here to check it out.  Nice work Ethan!
Posted by Timrod at 3:32 PM 3 comments:

This site is an ode to Lenard Lakofka's eccentric little module L1 The Secret of Bone Hill published in 1981, and, to a lesser extent, its 1983 sequel L2 Assassins Knot. This is not an attempt to create a Restenford-based campaign setting--a noble endeavor to be sure--but an in-depth reading of the work and an attempt to interpret some of the many quirky details of this oddball adventure setting.